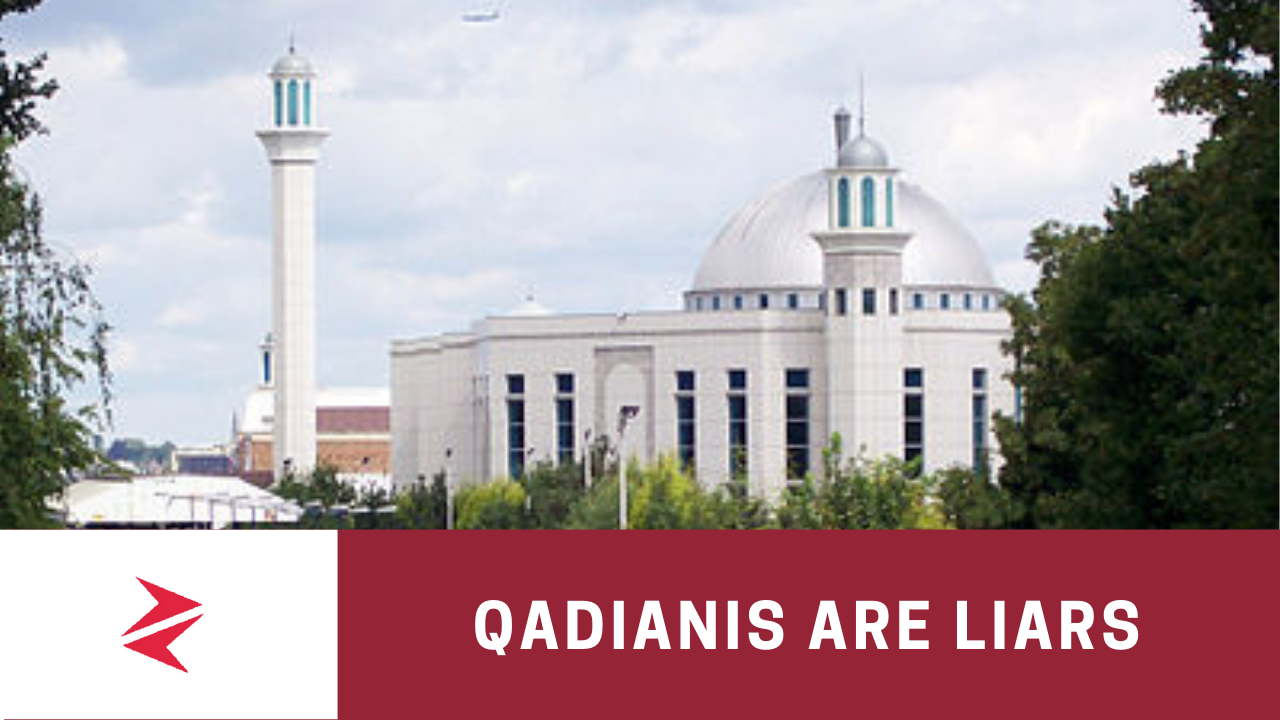 Ahmedis and their so-called scholars have declared non-Ahmadis kafirs. So there’s no question that they consider themselves non-Muslims and should accept they’re a minority.

In this article, I will blatantly expose Qadiyanis and their methodology to lobby their way into mainstream Pakistani media. In this regard, I seek Allah’s guidance, such that my motive is not to sway away these people from joining the true message of Islam. So far, it is established that Qadiyaniat can and never be a part of Islam. If this is to be accepted then they have all the rights that are to be given to any other minority. However, do you know that this cult thinks “Ijma” (the overwhelming majority) of the Umma digresses?

If you read mirza Ghulam’s book, you will find the front pages of that book, only saying the word LANAT hundred of hundred times to those who don’t follow it. Nevertheless, no hatred is to be exhibited towards them being human beings, after all despite my cognition, the worst of the formats. The debate in 1974 between the then-Qadiani caliph and the parliamentarians took place.

First and foremost, I will discount the fact that besides knowing the repercussion and knowing that a lot a many of the reader populace may have a soft corner for their manifesto, it is to be defined that:

Ahmedis are a misguided self-proclaimed off-shoot of Sunni mazhab (religion). They’re non-Muslims; they should choose to call themselves something else.

Major premise, a mazhab is a cultural manifestation of a way of life i.e., deen. Deen has certain principles without any manifestation that is rendered useless. When we speak about “La Iqra ha fid Din.” Deen is to be distinguished in this form as completely a bigger umbrella under which “Sharia” (the law), “Fiqh” (the understanding and school of thought), and “Mazhab” (the customary practices) comes. For being a Muslim or follower of Islam, you should have a basic belief that Allah is God, and Muhammad peace be upon him is his last prophet, and no other prophet will come after him. If anyone differs from this belief, then he is rejecting Islam’s basic belief and not able to say him as part of Islam, but he can label himself any believer other than Muslim.

The root of the dispute between Muslims and the Ahmedi community
They deceive the western public claiming them true Muslims while they believe in a new Messenger after Prophet Muhammad p.b.u.h. That’s why Pakistanis demand them to declare themselves non-Muslims first to claim minority rights. For those who claim that the Ahmedis consider themselves as minorities and a different religion, this Answers it all:

No compulsion in this context means that we shouldn’t force people to convert into the fold of Islam. Not that you portray what you are not. And legislation was passed after discussions with Ahmadi’s leaders at that time. Remember, all legislation to declare Ahmedis as non-muslims including 295c happened at the time of Z.A Bhutto who despite being a secular man was forced to respond to the mass killing of Nishtar College students by Ahmedis as these students passed by the Rabwah near Chinniot.

Do you know how it was decided that Ahmadis are non-Muslims?
The decision was made in the parliament and Qadianis was given a chance to debate with Muslim scholars. The question that was asked to Ahmedi elders “Do you consider other Muslims who don’t believe in Mirza Ghulam to be non-Muslims?”… the response was “yes we do believe that those who don’t believe in him are kafirs”. For the same reasoning, just like for Ahmadis if other Muslims are non-Muslims, for them they too are.

The principle of compulsion will NOT hold if a person VIOLATES majority’s RIGHTS (Rights to Honour, Property, Freedom), in that case, the AUTHORITIES will COMPEL that person to make amends/repay/or suffer similar pain. Similarly, taxes (which are received from the rich and spent upon the poor). In all these cases, the injunction of the Quran will supervene the Principle of NO COMPULSION, for obvious reasons.)

No compulsion means no restriction on anyone’s beliefs. One can belong to any school of thought having equal basic human rights. But having an opinion opposing to a specific school of thought and then asking to be called a part of them is totally different, it’s like making and accepting Newton’s fourth law of motion. It doesn’t mean you can go around allowing non-muslims (Ahmedis in this case, who do not believe in the finality of the prophet (saw)) with their non-Islamic practices declare that they are Muslims and they represent real Islam.

Do you know, Ahmadis make false visas and hide their identities while going to Ka’aba Tullah are usually cause of menaces such as harassment and begging in the name of Islam. Today, those who are found on Twitter exploiting the religion are to no short of liberal hypocrisy and exaggeration from their inward bias.

That is harming Islam and measures have to be taken against it. Allama Iqbal has categorically said that anyone who claims to be part of the Muslim community and even regards a Prophet of its own besides the Prophet PBUH, and labels all Muslims besides themselves as non-Muslims and disbelievers, such a person or group must be declared a non-muslim minority and be cut off from the Muslim diaspora. ( Zinda-Rood by Javed Iqbal )

The question is did Prophet Muhammad (Peace be upon him) declare anyone who recited a kalima, a kafir?

The blood of a Muslim who confesses that none has the right to be worshipped but Allah and that I am His Apostle, cannot be shed except in three cases: In Qisas for murder, a married person who commits illegal sexual intercourse, and the one who reverts from Islam (apostate) and leaves the Muslims.Al Bukhari 6878

We should and we will stand for the rights of Ahmedis as soon as they declare themselves as a non-muslim minority. Simple. Ahmedis don’t have any rights as long as they call themselves Muslims because they’re not accepting the constitution of Pakistan. If they don’t accept it, they don’t have any rights given by the constitution. Please look into the history of this law and what the situation was at that time about the necessity of this law. Yes, they have the rights, if they accept themselves as minorities which they don’t. Until otherwise, they can not even be regarded as the honorable citizens of beloved Pakistan.

What do you people know about Qadiyanis, their beliefs, what Islam says about them or what Islamic history has done to those who talk about another prophet?

I never ever hated any person of any religion but I quote a part of hadith:

Whoever among you sees that then he must stick to my Sunnah and the Sunnah of the rightly guided Khulafa’, cling to it with the molars. Sunan Tirmidhi, Hadith: 2676, Sunan Ibn Majah, Hadith: 42 So after the Hadith and Hazrat Abu Bakr R.A waged jihad against murtads.

Firstly, we can conclude that the penalty for a person is dead if he is an apostate. When a person claims to be a Muslim and then has the belief of another prophet after Prophet Muhammad (SAW), he becomes a murtad which makes the death penalty for them. So now you have two options for Qadianis, either be a murtad and be dead or accept that you’re non-Muslim and enjoy minority rights. By accepting in God they are better than atheists, yet the reason that Allah created this whole universe to demonstrate His omnipotence by the finalization of Prophethood through Muhammad (SAWW) alone. They are now way better human beings. They defy the purpose of the creation of the universe.

In the 10 years of wars after Nadr, only 259 Sahaba (the companions of the prophet) had been martyred but only in Jang e Yamama, the battle against the false prophet, the liar Musailma, around 1400 sahaba alehesalam Ajmaeen got martyred. When scholars say that they’re to be given all the rights of minorities on the condition that they accept themselves to be minorities, they’re being generous in my opinion. This issue is no joke. Allah’s Apostle said,

The Hour will not be established till about thirty Dajjals (liars) appear, and each one of them will claim that he is Allah’s Apostle

If there is a difference of opinion in the verses of the Quran where there is no prominent guidance by the Ahadith or Sahaba then the difference of inequality of him being the seal with the last of the prophets can be understood but when there are so many ahadith regarding Prophet Muhammad (SAW) to be the final Prophet, a person interpreting the meaning of Qur’an to be against what is in the Ahadith, these both cases are not the same. And the latter is Muharrifs, who are kafirs as they force their own version of the Qur’an against what Prophet Muhammad (SAW) gave us.

Qadiyanis, my friends, on the contrary, is adamant about the facts and record a will to be later re-buried in their lateral home Qadian which exhibits their stubborn attempt to play both the victim and profess evil. Will they still be regarded as citizens of Pakistan even if they don’t accept the Pakistani Constitution?

Last but not the least, some people find it funny anyway that you have to mention your faith in your passport! I always thought why most other countries do not ask that as it does not define your nationality or should not. Unless you get the concept of the Khilafat Movement that emerged in the early 1920s. The concept of nationalism came into being after that and the attempts of the British to control the debacle of their colonies after the War of Independence.

Disclaimer: I hold no grudge against a particular Qadiyani. They are minorities and have the full right to exercise their religion if they do not carry on refuting different parts of the constitution.